A friend of mine was visiting from ‘the north’ and so naturally that meant… feast time! Any excuse to eat right?? So who does the venue choice now fall to… the food blogger of course! I love food and am so happy I started writing this but a warning to anyone who does the same, all your friends will forever more expect you to pick the restaurant!

So, me… I love a good lot of sharing plates, not because I like sharing my food (those that do are lying or the food they are eating is not nice), but because I love to try a bit of everything! Based on that and the fact I am deprived of good ol’ Indian home cooking (think I may have told you this before) I thought… what about Roti Chai.

Now there are two sections to Roti Chai, the more commonly known street food bit upstairs and the more formal restaurant downstairs. I have not made it downstairs yet because I have been advised that it’s not worth it and either way, street food is my fav. But hey, maybe sometime soon…

So off we all set from our respective homes to Roti Chai, I decided to take the bus, generally a bad idea and this time it was because it didn’t turn up for 15 mins! So I was running a bit late and ‘the northerner’ who is always late was on time for once. So anyway she went off to do a bit of shopping and I was the first to arrive at the restaurant… I took the opportunity to take in the décor. Walls dotted with signs, some true Indian favourites like Parle-G biscuits (you guys remember that little boy’s face on the packet, found even in the most remote villages) and Lays crisps (i.e. Walkers to you and me) on sale and other things which transport you back to the motherland (ah I do miss that place!).

Onto the food… The starters… we ordered lollipop chicken, bhel puri and chicken samosa chaat. Mm mmm! The chicken lollipops were delicious! Great crispy outer layer and green chilli (not very spicy) dip. The bhel puri was alright (nothing special though), the chicken samosa chaat was by far my favourite because I have never seen this dish anywhere before (it’s definitely not a Guju staple) and it was so tasty!

Then for mains… we got railway lamb curry (loved this! Get it!), tastes just like my mum’s cooking – i.e. gooood! Pulusu chicken (basically chicken curry), also nice but not as good as the lamb curry. Bun chilli chicken which is something a little different from the usual Indian (maybe a modern day Dabeli? Ye maybe not, it’s just a burger), the bun has a slight sweetness and the chicken is flavoured well.

And then most importantly… SECRET MENU ALERT!! 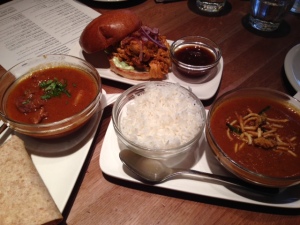 We spotted a couple of tables having a rice dish in a clay pot… So I told my friends it must be biryani, but the only rice dish on the menu was pilau (not a fan!). So we asked the waiter and it was indeed biryani, he gave us a ‘nudge nudge wink wink’ look and said it isn’t on the menu. Now biryani is my ultimate favourite Indian main (I’m sure many of you would agree). Roti Chai serve the usual chicken or lamb… we went for lamb and it was to die for! Another dish you must get!!

As we were in Roti Chai, we thought we had to have their masala chai… But were not impressed. Way too sweet and way too much masala. Maybe we got a bad batch, but if it’s in your name you got to make it good, right??

All in all… Go there!

P.S. The chicken and lamb is halal. They also sometimes have duck on the menu, this is not halal.

4 thoughts on “why oh why roti chai”