I was treated to a Meat Co dinner last Friday to celebrate my birthday. It was the first celebration of the weekend long event that was my birthday!

So I should have been excited for the festivities ahead right… Wrong! I had bought the obligatory sweet treats for people at work; muffins were on offer at Tesco, score! (The Guju side definitely came out there) So people started asking how old I was… I told them all 21, but for some reason they didn’t believe me.

However, never one to turn down a lovely meal, I put my glad rags on and off we set. One thing… I had no idea where we were going.

I was told we needed to get on the victoria line and then change to the central line… So I was relieved because there are some pretty nice areas on the central line. When we got off at Shepherds Bush I knew it had to be Meat Co!

Ok first things first, I love that they have a lift (my poor feet which were in very high heels were rejoicing!) and not just that, but when you get up to the top floor there’s a lady waiting there with menus to walk you to your table. Now that is great customer service!

So we sat down, I had a mini breakdown (about my age) so the waiter came to ask us

if we were ready about three times before we actually ordered! For starters… I was tempted by the short rib and scallop with mash potato, mainly because halal short rib is not so common. But it sounded quite heavy and given the immense amount of meat I was about to consume I wanted to keep it light. So we kept to the usual favourite… calamari. The calamari comes in a salt and pepper batter, now I have had a lot of calamari in my time and this was good! The calamari was thicker than normal, tender and so well flavoured! Definitely recommended.

Then for mains… initially I looked across the menu at the aged beef and thought I’m going to get the aged British fillet, but it was my birthday! So my eyes quickly drifted over to the Wagyu 😀 Now I have tried Wagyu from others before, but never had a whole steak to myself. So I thought it was about time… I went for the 300g Wagyu, which on that day was only £50 something, slightly more than the British fillet and slightly less than the American fillet. So it definitely did not break the bank, contrary to its reputation. The Wagyu is charged at ‘market price’, so changes daily.

The waiter recommended no sauce and I was more than happy with that. Now I love the taste of red meat and like it rare, which is exactly how I ordered it. I think I am among one of the very few Asians that goes for rare, but I imagine it’s a growing minority. I know my mum’s generation were taught to cook everything well done! The waiter also recommended the asparagus as it would go well with the steak.

The husband went for pepper-crusted fillet, on the waiter’s recommendation, cooked medium-rare. He used to go for medium, but I’m bringing him over to the rare side 🙂

So my main arrived and it was covered in some sort of sauce and when I took the first bite it just tasted like steak soaked in BBQ sauce. Not good! Working in meat and liking the taste and texture of meat, this defeated the point of having an expensive steak. I called the waiter over (I am the worst customer by the way! Although I am sure you have gathered that) and asked him why it was covered in BBQ sauce and apparently all their steaks come like that and it was basting. As our waiter, Milos, was absolutely lovely he was more than happy to take it away and smoke the flavouring off.

So note to all… tell them if you don’t want your steak arriving covered in BBQ-like sauce, apparently if you order another sauce they add it on top. Not sure about that! You need to taste the flavour of the actual meat, not cover it up. Also this is not something I remember them doing in the past, however I do have a bad memory so don’t hold me to that.

When I got the steak back and took my first mouthful… Wow! The taste was amazing!

The meat was tender, melt in your mouth and juicy. That’s why I love my steak cooked rare, it’s just such a pleasure to eat. No mouth-ache from chewing a lot or the need for sauce because it’s dry.

Now I have had a lot of good steak in my time and I have to say, even though the Wagyu was lovely, it was not life-changing as its reputation seems to suggest. When I have steak next time I won’t feel I need to order Wagyu and I would be more than happy with a fillet or rib-eye. Don’t know what you guys think, but I sometimes feel like people hype one thing up and everyone jumps on the bandwagon. 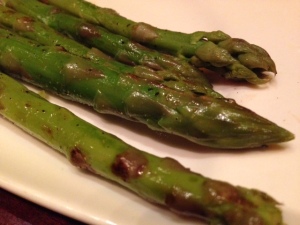 I was disappointed with the asparagus. They tasted fine, but you only get 5 and it costs £4.25! Rip off in my opinion.

I tried the husband’s pepper-crusted fillet and it was really tasty, however the meat was a bit too dry for my liking. But that could have been because it was cooked slightly more than I preferred.

It was strange though because the inside was still very red, however the meat seem slightly cooked all the way through and dry. I am guessing this was due to the fact they smoked it.

Now the waiter encouraged us as much as he could to get dessert and I felt like I should, but I was honestly so full. And then I was also thinking that the husband would most definitely have told them it was my birthday and that I needed a dessert for the inevitable candle. But no, no pressure from the husband. Bless the waiters, just before bringing the bill they brought out a scoop of ice cream with a candle and ‘Happy Birthday’ in chocolate on the plate (sorry for the half eaten picture, we couldn’t wait!). They also sang to me and when they got to the name part of the birthday song, just sang ‘Happy Birthday to Madam’… It was so awkwardly funny!

The vanilla ice cream was on a bed of pistachio, nice touch, but I don’t really like pistachio so it was lost on me.

All in all the bill came to £140, so definitely not somewhere I would treat myself to often, but remember we did go all out. I was not shocked by the bill, so the food was worth it. They do a 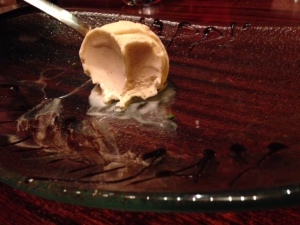 lunch menu (approx. £12.50) which is much more reasonable, so that’s a wallet-friendly way to get the Meat Co experience 🙂