So I got an email at work about IFE (International Food Exhibition) 2015, I’m subscribed to a lot of magazines and mail shots so I have become de-sensitised to most advertising.  I ignored it the first few times (that’s the default)… Then after about the fifth time (yes they hound you a lot), I thought I’d give it a look. The halal companies were not immediately obvious, but after a quick search I saw a decently long list, from fresh meat suppliers, to frozen food, to non-meat products. Well of course… I just had to go!

So I was organised and made my priority list of exhibitors I wanted to see. Having been to exhibitions before, you end up wandering around twice as long trying to figure out where you want to go. And this was at the Excel, I could have been there for days!

First stop was No.1 Foods who supply beef bacon…

Us halals don’t like to be left our right?? 😉 I had a great conversation with them about how they cure the meat to give it that bacon flavour. They also do rashes, sausages etc. Who said no pig meant no English breakfast??

I then started to make my way to the next one on the list, when this lady holding some fried popcorn chicken asked if I’d like any, I asked if it was halal thinking the response would be no… but it was! I have not had fried chicken in ages… I am not a fan of fast food. But this stuff was good! I was invited to sit down at a table while their chef went on to make me some more samples. The company supplies halal Brazilian 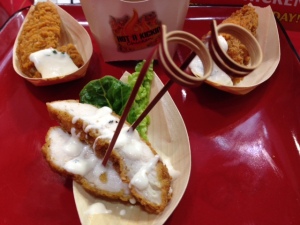 chicken to many of the large wholesalers in the UK. So much of the chicken you eat in restaurants probably comes from these guys. So that was my lunch pit spot sorted.

I then spoke to a lovely lady from Luis Oliveras.  Luis Oliveras supply cold meats like chorizo (I always get jealous when people go on about how good chorizo is), cured beef, salchichón (apparently the most popular, had never heard of it before) etc. Apparently they are the first of their kind in Spain. Demand in Spain is not that large,

however they have had success supplying these meats across Europe and into the Middle East. After a very interesting chat she was kind enough to give me a sample of all the halal sliced meats… I’ve got a lot to get through!

After seeing some other companies… My last high priority stop was Aluva. After searching ‘halal’ in the exhibitor list I have to say this was the exhibitor that intrigued me most… They are the first halal chocolate company in the UK. Who would have thought?? So the company

has been set up by Farheen Raza. It was great speaking to an entrepreneur and hearing the journey from idea, to where the company is today. She even asked my opinion on price points… And through the conversation I learnt she’s a fellow KPMG-er (well I used to be, but it stays in your blood!).