My recent holiday meant I was going to miss my best friend and her husband’s birthdays. So (of course) I said that we should all go out for a meal before…

As it was their birthdays I thought it only fair that they choose the restaurant. But now halalyou.com is here, they told me halalyou.com had to decide! I always have an ever growing list of places I’m thinking of going to. Comes in pretty handy in instances like this! 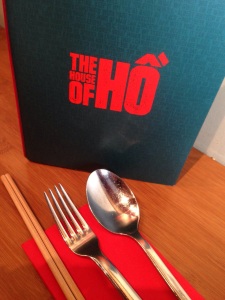 mentioned it was good. So I did the usual… opened up explorer (yes I’m old school, I don’t use chrome or safari on my desktop) found their contact details and sent the ‘Hi, are you halal?’ email. While on their site I spotted that the founder/head chef is half Chinese and half Egyptian… A very different combination and more importantly meant there was halal hope!

So I was so happy when I got an email back to say their chicken is halal. Yay!

When I mention the name ‘House of Ho’ to people, they snigger a bit first and repeat the name like they misheard it. Get your minds out of the gutter people! Ho comes from the fact it is located in SoHO…  Ok maybe I giggled a bit when I first heard it! Don’t judge me… But on a serious note, it is in Soho so be careful and make sure you don’t venture into the wrong place!

Now the day I visited, it was beautifully sunny and the venue has large windows across the front, which were all open. It brightened up the place (which was quite dimly lit) and also provided some lovely, fresh (well heavily polluted) air. The venue is just a short walk from Piccadilly Circus, in the heart of Soho, and just nearby Bunny Chow (click to see a previous post). 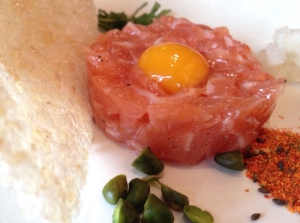 On being seated we were given the standard menu and lunch menu, but as always I had done my research prior to booking and knew there was a May offer menu *Guju alert*. So I asked for this… The birthday couple arrived and we got to ordering.

They currently have 50% off their set menu and the same £16 May offer menu for June as well.

We decided to go for two May offers (6 dishes in total) and 6 dishes from the standard menu. 3 dishes per person is recommended and so we followed their advice. Amongst us was one vegetarian, two halals and an everything will do. Now to run through the dishes I had…

My favourite dish was the salmon tartare with came with a quail egg, spices, pistachios, onions and some herbs. I had only ever heard of steak tartare (which I have not yet tried) before so I was very intrigued and had to try it… I was not disappointed. I liked this dish best because it was unusual, but also mixing everything together and putting it on a fluffy cracker type thing meant for a tasty and fresh dish. However others on the table were not so impressed, but I love raw fish so I was in heaven. Also 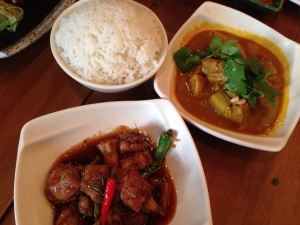 note the egg is raw so if you’re a bit wary of that type of thing, this is not the dish for you. I was fine afterwards, so nothing to worry about though! 🙂

Next up I really liked the vietamese chicken curry, it was flavourful and had a good amount of chilli. You can’t go wrong with curry right?! Some advice, unless you are hardcore do not bite into the dried chilli. We thought we were… we were not!

I was not impressed by the lemongrass chicken curry (the lighter coloured curry in the photo) and others agreed, as some of this was leftover after the meal. 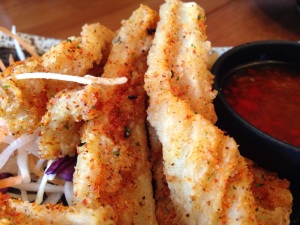 I loved the 7 spice marinated squid, it was probably my second favourite dish but if you have read my previous posts you will know that I love squid and it would be so predictable of me to mention this dish too quickly. The squid was cooked well and the marinade was scrummy.  It was a dry marinade, but teamed up well with a very light chilli sauce. 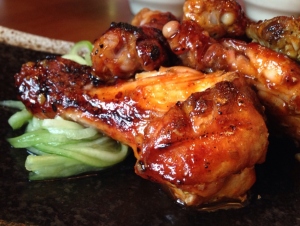 wings are one of those things which you order because you expect them to be good. The chicken was succulent and the coating sticky, sweet and spicy. Nice!

The fresh summer vegetable rolls were fine, just cold, uncooked, unspiced veg put together. Definitely fresh, but acts more like a side salad than anything else. If you are a carnivore, don’t bother. 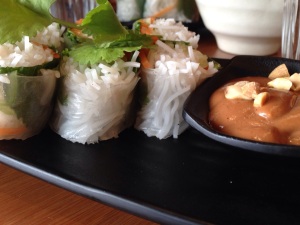 Now when ordering I was pretty excited and convinced we should get the grilled octopus. However, it just tasted overly smoky. Not the nice sort of smoked BBQ taste, but a dry and non-complimentary charred taste. Was not a fan.

Overall I would definitely recommend this place… food is of very good quality with lots of variety, the venue is 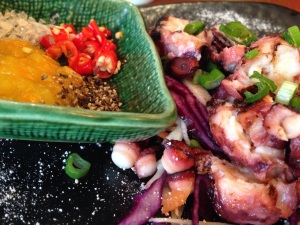 nice, service great and the location is central. What more do you need! Give it a try, remember only the chicken is halal, and let me know what you think 🙂