So I took a punt when I saw there was a street food concept setting up shop in Soho and emailed them to ask if the meat is halal… and (as you may have guessed because I have written an article on them) it is!!

It was a Londoner’s dream last Saturday, sunny and hot, a very unique and blissful occurrence. We were out just as the rest of the city was, soaking in some much needed Vit D and looking for a lunch spot. So thought we would give these guys a try…

I have to say walking around Soho during the day is definitely an eye-opener! But 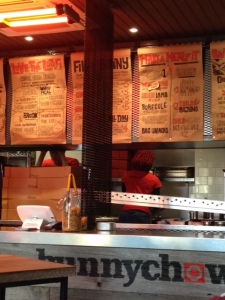 anyway back to the point… Bunny Chow serves delicious South African street food, which consists of a bun shaped like a muffin that has been hollowed out and is then filled with ‘bunnies’. Now when I first read this on their website, I did ask myself are these real bunnies?? Because I think I would have an issue eating them as I had a pet rabbit when I was younger. Now I am no animal lover, but even that brief encounter is enough to put me off eating little fluffy bunnies.

The ‘bunnies’ are in fact your choice of chicken, mutton or pork (obviously the last one’s not halal) curry filling. They also add mango chutney, raita, poppadoms and a side salad of cabbage, cucumber and other things flavoured with lemon. I know what you are thinking, this sounds like an Indian meal… and you would be right, it tasted just like that. 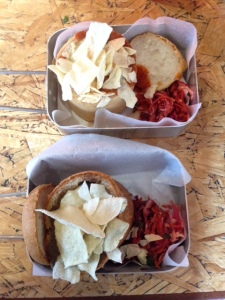 So when I got back home I did some googling (i.e. Wikipedia-ing) to understand where the Indian influence came from. I learnt that the dish actually originated in Durban where there was a large Indian community who came over as migrant workers, some say they worked on the sugar cane fields. As always, thank you Wikipedia it makes so much more sense now!

Right back to the story… omg the food was amazing!! Now I am Indian, so I know what a good curry tastes like and this was delicious! Not the sort you get in an Indian restaurant where nothing but oil is left at the bottom of the bowl once you’re done, but the yummy curry your mum makes for you. 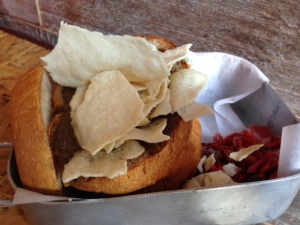 True to my roots I went for mutton and chose a brioche bun. The curry soaks into the bread and the sweet and savoury combination worked so well. The meat was very tender and broke apart easily, and the spices were just right. I was amazed! I had to forcibly slow myself down as I was guzzling the thing. The mango chutney and raita worked well as always and the broken pieces of poppadom added great texture.

The husband went for the classic chicken in white bread. It was also really flavoursome, but I definitely preferred mine. I have to say in recent years I am beginning to realise that red meat is in my blood! (I know that’s not physically possible and doesn’t really work, but you know what I mean!) 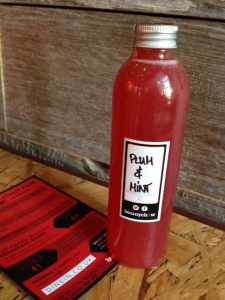 The other thing which I loved about Bunny Chow was that they make their own juices. Not only that, but right there in the basement. You cannot get much fresher than that. I went for plum and mint as I have never seen plum juice before, so was intrigued. It was certainly tasty, but I am not a plum juice convert. I would highly recommend the fresh juices.

So basically… go there! It is delish and at only £5 per bunny, a flippin’ bargain! Especially slap bang in the middle of Soho. Let me know your reviews…